A stable supply of electricity throughout the year which is not dependent on weather conditions.

Geothermal power plants use hydrothermal resources that contain certain aspects of hydro and thermal energy. The thermal energy is contained in the rock and fluids beneath the Earth’s crust. It can be found from shallow ground to several miles below the surface, and even further down to hot molten rock (magma).

The first geothermal generated electricity was produced in Larderello, Italy, in 1904

Nowadays geothermal energy is generated in over 20 countries. The United States is the world’s largest producer, and the largest geothermal development in the world is The Geysers, located north of San Francisco in California. In Iceland, many of the buildings and swimming pools are heated with geothermal hot water.

This can be achieved by drilling wells into the earth and then piping steam or hot water to the surface. The hot water or steam powers a turbine that generates electricity. Some geothermal wells can be up to two miles deep. These underground reservoirs of steam and hot water can be tapped to generate electricity or to heat and cool buildings directly. Geothermal water from deeper in the Earth can be used directly for growing plants in greenhouses. It can be utilised to pipe geothermal hot water under roads and sidewalks to melt snow. A geothermal heat pump system can take advantage of the constant temperature of the upper ten feet (three meters) of the Earth’s surface to heat a home in the winter, while extracting heat from the building and transferring it back to the relatively cooler ground in the summer. 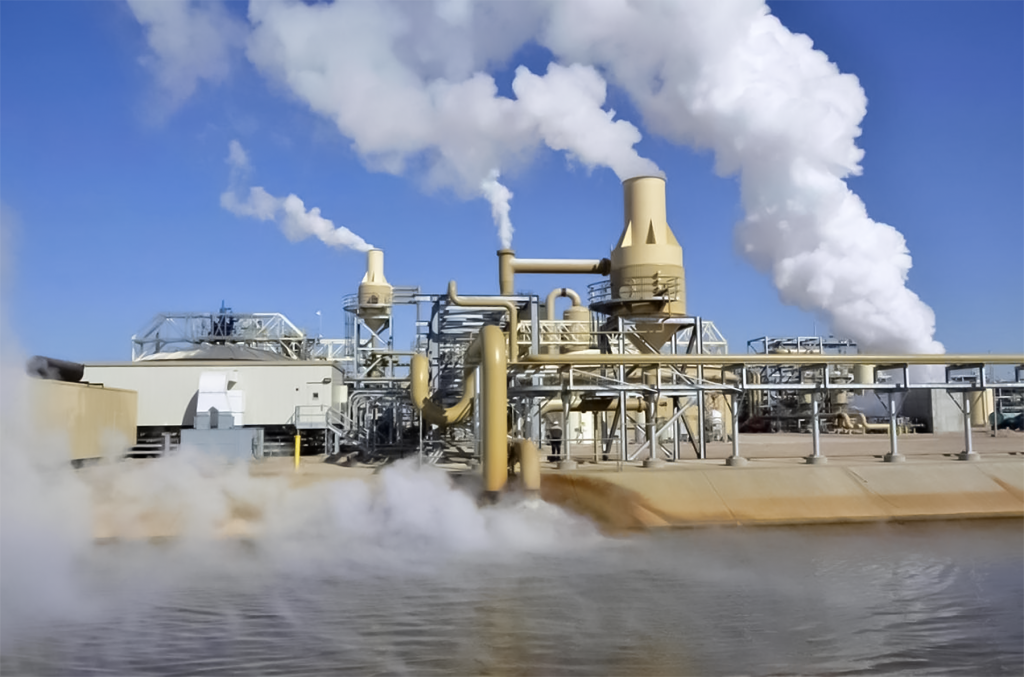 There are three basic types of geothermal power plants:

Geothermal power can be extracted without burning fossil fuels such as coal, gas, or oil. Geothermal fields produce only about one-sixth of the carbon dioxide that a relatively clean natural-gas-fueled power plant produces. Binary plants release essentially no emissions.

Unlike solar and wind energy, geothermal energy is always available, 365 days a year. It is also relatively inexpensive, and savings from direct use can be as much as 80 percent over fossil fuels.

So far, geothermal energy has not gained as much traction taken as other renewables. More than a century after humans started using the Earth’s hot water and steam to produce power, geothermal provides less than 1 percent of global electricity. There is no problem with supply: our planet’s core is a searing 6000°C, and the heat contained in the upper 3 kilometres of the crust would be enough to meet the world’s energy demand thousands of times over.

Geothermal energy also sidesteps the problems that plague other clean sources of energy. It is always available, regardless of whether the wind blows or the sun shines.

Alongside nuclear and hydropower, which have their own challenges, geothermal offers an attractive source of clean, reliable baseload electricity. The challenge now is to increase the power and availability of geothermal energy so that it can truly compete as one of the most cleanest renewable energy sources.

Over the past few decades however, researchers have been exploring ways to extract even more heat, especially in regions with less than ideal geology.

This new approach, known as enhanced or engineered geothermal systems (EGS), can mean adding fluid to dry rocks to transport heat to the surface and generate steam, or fracturing impermeable formations so that liquid can flow through the hot rocks, heating up along the way.

EGS could potentially open massive stores of geothermal heat. A 2006 report led by Tester, found that in the US alone, the technology could unlock 130,000 times as much energy as the country uses each year.

Realistically, other sources of energy are always needed, and we are likely to exploit just a fraction of geothermal’s potential. Above 374°C and 221 bars of pressure, water transforms into a supercritical fluid.

As the temperature and pressure rise, water gets lighter and steam gets heavier until they become one phase

Supercritical water at 400°C contains five times as much energy as water at 200°C in a typical geothermal well. It also transfers energy twice as efficiently and has a lower viscosity, flowing out of the ground more easily.

For now, scientists and energy companies are mostly pursuing EGS and supercritical geothermal in places where it is relatively easy to reach the temperatures they need – like Iceland, Italy and the American West. But eventually, many hope these techniques will allow geothermal energy to spread. For the right price, EGS could make geothermal energy available across much of the world. Even in places with cooler crust, it could be used to extract heat for buildings, says Tester. Supercritical geothermal could open enormous energy reserves in volcanic areas around the world. Ample supercritical resources in one place could even be enough to power surrounding countries.

Get in touch using the e-mail address below for more information or to set up a call to discuss our services.